Photometry with AIP4WIN: A Tutorial – Part 1


By R.D. Boozer, MoA in astrophysics

The science of photometry can be used by both amateur astronomers and professionals for some very advanced scientific work.  You can detect the light changes caused by eclipsing binary stars, plot the changes in luminosity of a variable star and even detect an exoplanet orbiting another star.  This tutorial will be your step-by-step guide on how to employ the powerful Magnitude Measurement Tool that comes with the renowned astronomical imaging software known as AIP4WIN by Richard Berry and Robert Burnell.  Special thanks to Mr. Berry for giving me permission to include screen images and extensive operating details from AIP4WIN.

The proper equipment for this endeavor is as follows:  a telescope with an accurate tracking drive, a sufficiently sensitive CCD or CMOS camera, and a computer with AIP4WIN installed.  AIP4WIN comes on a DVD accompanying the book The Handbook of Astronomical Image Processing by the aforementioned Messrs. Berry and Burnell. 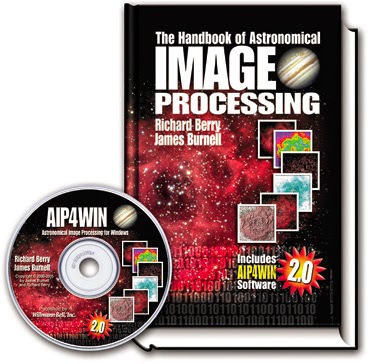 The instructions in this tutorial are most applicable to CCD or CMOS imagers with precise temperature control.  While almost all astronomical imagers have a Peltier cooler built into them which significantly lowers the temperature of the imaging chip to help eliminate electronic noise, many just cool the imager a significant amount below the ambient air temperature without keeping the temperature at a steady value.  This tutorial is mainly geared towards those imagers with precise temperature control, though I will mention steps that users of imprecisely cooled cameras must do to get really good results.  It should be pointed out that the user of an imprecisely cooled camera will have to do a good bit of extra work to obtain accurate results, but it will be worth the effort.

Many thanks to Dr. Andrew Cole of the University of Tasmania for giving me permission to use astronomical images shot of star Gliese 876 at the university’s Canopus Hill observatory on July 24 of 2004.  Specifically, I am going to relate how I conducted the photometry part of my research project in 2009 to obtain my Master's degree.  Gliese 876 had already been determined to have several exoplanets via Doppler technique.  The task assigned to me was to see if the image data collected on the night in question showed a transit of the star by one of these exoplanets.  If the transit occurred, the star’s light would dim as it crossed in front of the star’s disk.

Such a transit was unlikely to be detected for two reasons: 1) the odds that the planet would have an orientation relative to Earth that would cause it to pass in front of the star were very low and 2) weather conditions were not optimal when the images were shot as there was some cloud haze.  However, in regard to the second concern, the particular method chosen to photometrically measure the stars brightness is capable of cancelling out much of the negative effects of variation in brightness due to the ever changing cloud cover.

AIP4WIN has a number of advanced automated features that boost the efficiency of photometry related research to a very high level by dispensing with much of the time consuming drudgery that normally is associated with this type of research.  The higher level of automation should also decrease the likelihood of human induced error during the collection and analysis of the photometric data.  One note before we continue: what traditional photographers refer to as “exposure time” (length of time that light is acquired from the object being observed) will be referred to as “integration time” as is common among astronomical professionals.   I should also mention that the way one operates the software mentioned in this tutorial has not changed since I obtained my Master's degree (as of the time of the writing of this tutorial in 2014).  Thus, the instructions in this tutorial are still applicable as I write it.  However, any changes to the software made in the future may not be reflected in the tutorial.

None of the initial images had any processing done to them.  Instead, they were supplied with support files that included bias frame files, dark frame files, and flat frame files.  The assumption being that whoever uses the images would calibrate them sufficiently by applying the support files to obtain final images that were of a quality high enough to perform photometric research.  Immediately following is a general discussion of the purpose of the support files.  Actual descriptions of how these frames were used and illustrated depictions of them will be included later in this tutorial within more specific discussion.

Bias frames are images with no exposure time and no actual light exposure.  Having no dark current (because of the zero exposure time) and no light induced signal, they show only the random noise produced by the CCD’s amplifier and any underlying fixed pattern variation in base pixel ADU values.  (Berry and Burnell 124)

Dark frames have an exposure time greater than zero, but just as with bias frames no light is admitted into the camera during the so called “exposure time”.   In fact, the lack of light exposure for certain types of CCD frames is a good part of the reason why the time during which the CCD is accumulating new pixel data is often not referred to as an exposure time, but instead as an integration time.  As I mentioned earlier, this tutorial will use the latter term.  Dark frames are used to remove quantum mechanical noise induced by the temperature of the CCD chip. (Berry and Burnell 124)    The best kind of dark frame is one where a bias frame has been subtracted from it on a pixel-by-pixel basis, so that amplifier noise and fixed pattern bias has been removed from it.  Specifics of how dark frames are created depend on the technique used to cool the CCD detector described as follows.

Cooling the CCD detector helps to remove some of the unwanted effects from thermal noise. Had the camera merely been imprecisely cooled by some amount below ambient air temperature, the temperature of the CCD would change from one image to the next as the ambient air temperature changed.  This temperature change would cause each image to have different amounts of thermal noise.  In such situations it is necessary to shoot a couple of dark frames before and after each main image exposure with the same integration time as the main exposure.  Those four dark frames would then be averaged to make a master dark frame that can only be used for that one particular image. (Walker 28)

However the U of T images were shot with a CCD camera held at a specific temperature for all exposures; therefore, only one set of dark frames were supplied (all of them shot within a short time period before the observation run was begun) because the constant temperature would have insured the thermal noise would not change for the entire multi-exposure observing session.

None of the dark frames had exposure times that were equal to the image exposure times.  In fact, dark frame integration times spanned a range of 5, 6, 35 and 180 seconds.  When a precisely temperature controlled camera is used, such a variety of dark frame exposures is standard procedure and the supplied dark-frames are to be used to make one scalable master dark frame that can be applied to any image regardless of integration time. (Walker 29)  A description of how and why this process works will be explained in due course.

Once a suitable bias-subtracted dark frame has been produced, it is subtracted from the image frame on a pixel-by-pixel basis to obtain a stellar image that contains very little equipment-derived noise.

Flat-field frames are true light exposures, but are not exposures of the image to be studied.  These frames are used to counteract unwanted imaging artefacts due to imperfections in the combined telescope/camera optical system.   To produce a flat-field frame, light of uniform intensity over its cross-sectional area is sent through the entire optical system.  In this scenario, the optical system must be assembled in the identical configuration under which it will be used during observation.  The flat frame will reveal such problems as vignetting in the outer frame of the image, reduction of pixel sensitivity due to shadows of dust particles on the camera’s optical window, uneven pixel sensitivity in the CCD sensor, etc. (Berry and Burnell 180-181) Before the flat frame is used, it must be calibrated with the bias and dark frames to remove noise generated by the amplifier and thermal conditions.  Forthcoming will be instructions on how to shoot a flat frame and the mathematical application of the flat frame to the subject image for removal of the effects of the aforementioned artefacts (don’t worry, the software will do the mathematics).  In fact, instructions on actual implementation of the above described steps will begin with the next part of this tutorial.