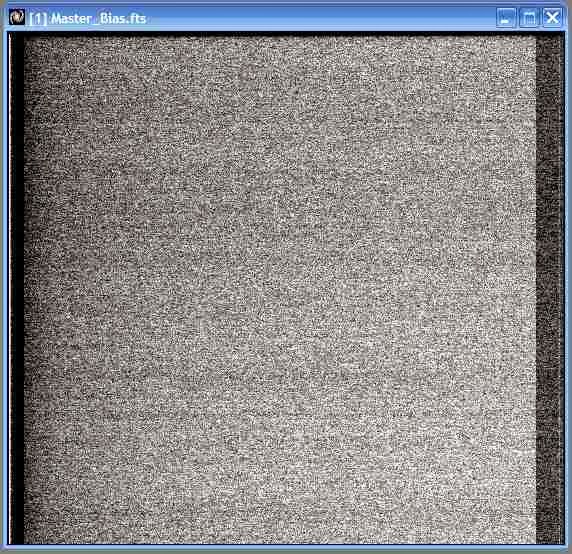 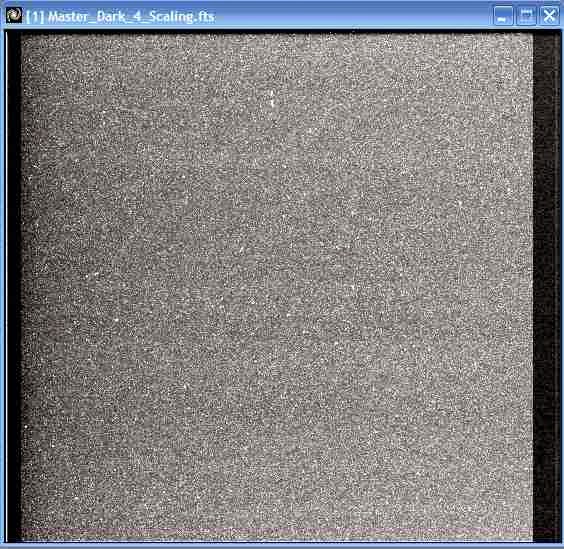 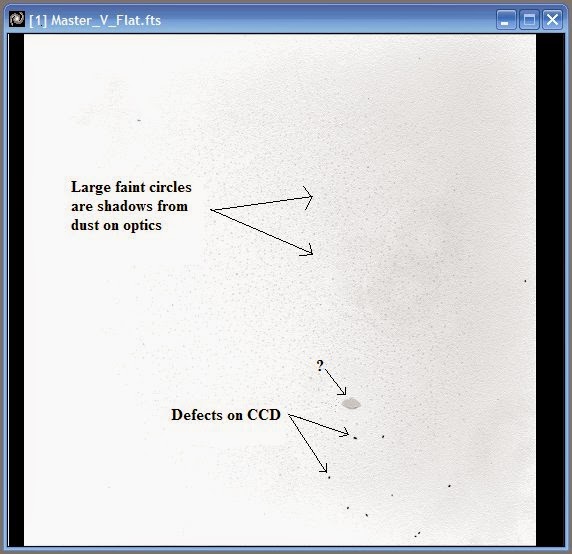 The master bias and scaling master dark frames shown in Figures 14 and 15 do not really reveal any important information to a human viewing them.  They don’t need to.  They exist solely for the software to optimize the image by eliminating electronically generated artefacts that are beyond a human being’s control.

However, the master flat-field frame is a different story since it may sometimes reveal problems that are the result of human negligence.  In the illustration depicting the master flat-field frame, I have labelled a number of common mostly minor issues that seldom cause serious problems, since the purpose of the master flat-field frame is to counter those effects.  Nevertheless, sometimes imperfections happen due to simple carelessness and may be so severe that flat-fielding will have difficulty fully correcting them.  Such is probably the case with the small solid grey oval labelled “?” that appears near the bottom of the frame whose darker color indicates that pixels within it got a much lower photon hit rate than they should have.  As shall be mentioned later, in regard to an unrelated issue wherein I suspected a bug in AIP4WIN, I sent copies of my master bias, master dark, and master flat-field frames to Richard Berry in his role as lead user supporter of AIP4WIN.  In a side comment, Mr. Berry brought notice to the oval saying, “… [it] looks suspiciously like someone sneezed on the optical window of the CCD camera.”  Though the flat-field frame may correct for most of the inaccuracy caused by such carelessness, it by no means does a perfect job.

The reader may have noticed another tab in the series in the Calibration Setup Tool that is labelled Defect.  This is used to repair cosmetic problems on images that are not used for scientific purposes.  Applying this function to images used for astrometry or photometry will compromise the integrity of the image data. (Berry and Burnell 204)
All V filter images were shot with an integration time of 20 seconds.  The created master bias frame, scaling master dark frame and V filter master flat-field frame were used to calibrate every V filter stellar image via the Auto-calibrate option under the Calibrate menu.  An uncalibrated V filter image that has just been loaded is displayed in Figure 17 with calibration imminent. 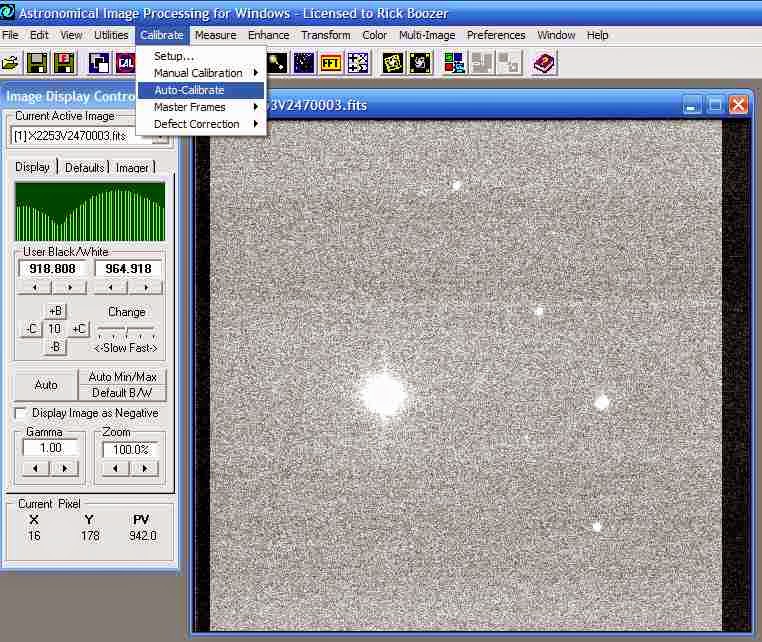 Figure 17: A raw image is about to be calibrated.

As soon as the Auto-calibrate option is clicked, all of the master calibration files are applied to the raw stellar image.  That is, the master bias frame is subtracted from it, the scaling master dark frame is scaled to match the image’s exposure time and then subtracted, and the image’s pixels have the previously described flat-field scaling algorithm applied to them using the master flat-field frame.  An image that has been fully calibrated in such a manner is shown in Figure 18. 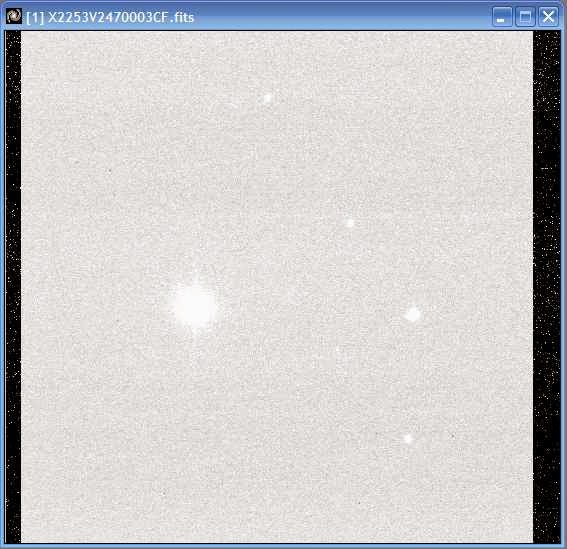 The letter ‘V’ in the middle of the filename shown in the title bar above the image designates that it is a V filter image.  Of course for I filter and R filter images, there will be either an ‘I’ or ‘R’ in that position.  The rightmost two digits indicate where in the chronological sequence that an image fits; i.e., image 03 above will be followed by image 04, etc. I added “CF” to the filename to indicate that it had been calibrated with bias and dark frames and with flat-fielding applied.  I was initially disturbed when I saw that the calibrated image came up on the screen with a low contrast or “washed out” appearance and I suspected either a bug in AIP4WIN or that I prepared one or more of the master frames incorrectly.  It was at this point when I sent copies of his master frames and an image calibrated with them to Richard Berry, co-author of and lead user supporter for AIP4WIN.   Berry offered assurance that I had produced a good calibrated image and went on to remark in the same email, “Always think QUANTITATIVELY with astronomical images -- never trust the appearance on the screen.”  Though I found Berry’s comments somewhat reassuring, I felt the need to empirically prove that the calibrated image was significantly better than the original.  After some consideration, I came up with the idea of seeing if there was a significant improvement in signal-to-noise ratio going from the raw image to the calibrated one. 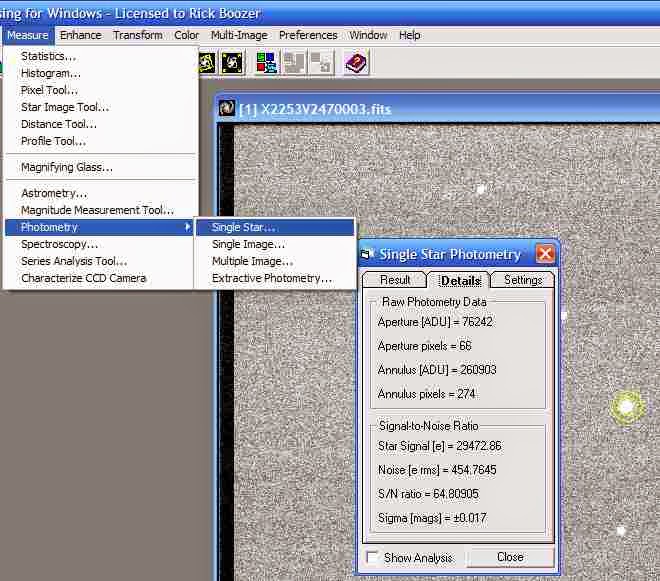 Figure 19: Getting the SNR of a star in the raw image.

As shown in Figure 19, the Single Star Photometry function was used on a raw image.  It was invoked under the Measure menu by clicking the Photometry option and then choosing the Single Star suboption.  The last action caused the depicted dialog box to appear.  After a star is clicked in the image, a number of data are given under the Details tab, one of which is the signal-to-noise ratio of the selected star that is indicated to be around 65.  Next an identical series of actions were repeated for the calibrated image using the same star. 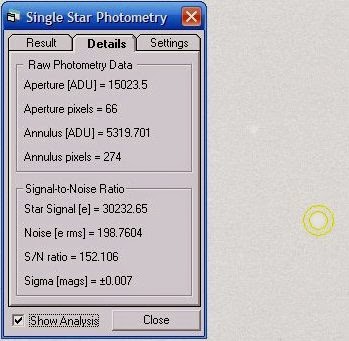 Figure 20: Getting the SNR of the same star in the calibrated image.

The SNR of the same star in the calibrated image is about 152.  Approximately 2.4 times greater than in the raw image!  It appears that calibration was indeed a success.

Two V filter images were immediately rejected without even checking them I was told beforehand that Gliese 876 was saturated in those images: X2253V2470028.fits, and X2253V2470048.fits.   It should also be mentioned that all other images exposed with all filters were examined to see whether or not they contained a saturated star image.  The procedure that I followed for determining this condition will now be outlined. 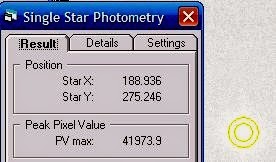 Figure 21: Checking for saturation of Gliese 876.

First, the image to be checked was loaded and the Single Star Photometry function was invoked as described earlier; however, the Result tab was used this time.  The brightest star in the image (that was always Gliese 876) was clicked.  In the case of all other V images, I found that the peak pixel value for that star was significantly less than the saturation value of 65535.  As an educated guess, I would say that since the flat frame cannot do a perfect correction for pixel variation, any image should be rejected if the peak of the target star is higher than the upper 50,000s.   In Figure 21, one can see that the star’s peak pixel value is 41973.9 and so the image is a good candidate for photometry.

In the V filter images, the target star, Gliese 876, is the most prominent star.  In a few of the images, either only one star other than the target star is visible or some others were fairly faint.  In all of the rest of the images four other stars are prominently visible.   Figure 22 depicts one of the worst images where there is only one star other than Gliese 876 that is plainly visible and that is the star to the far right. 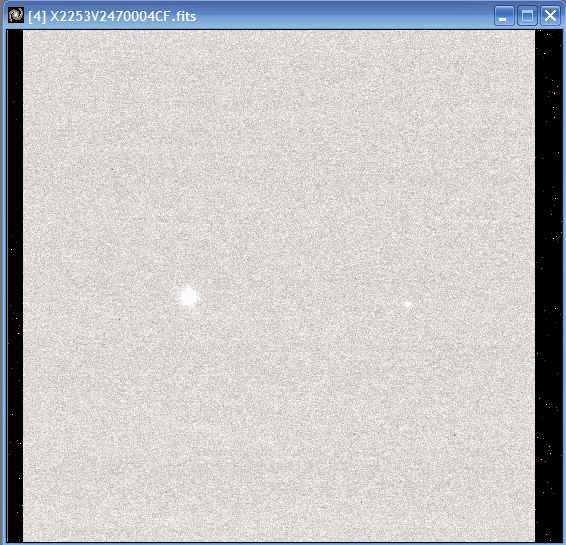 Figure 22: One of several V images that show only one other star than Gliese 876.

Why are there some images where only the target star and one other star are prominent, though in the remaining images the other stars are plainly visible?  If seeing conditions were relatively constant throughout the night, there should be the same number of prominent stars visible in each frame, since the images were all shot with the same integration time.

The two worst offenders are images X2253V2470001 and X2253V2470004.   To investigate what is going on, I looked closely at these images and compared them to images where more stars were prominent.

For example, the fact that only the brightest stars are showing in image X2253V2470004 might lead me to suspect that a thin cloud layer obscures the other stars.  But is there a way to empirically prove that?  To get the necessary evidence to check this hypothesis, a test was done.  A comparison was made between image number X2253V2470004 (which is depicted in Figure 22 as a one of the frames showing only Gliese 876 and the comparison star) and image X2253V2470005 (that is one of the frames showing at least five prominent stars). 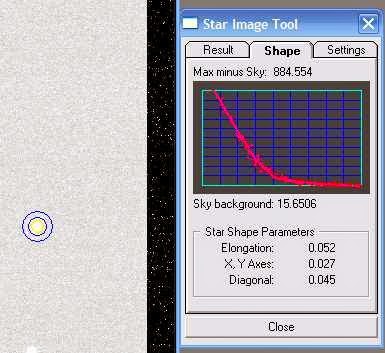 Figure 23: Light profile of a star from an image showing several stars.

The above pictured dialog box was invoked by going to the Measure menu, clicking the Star Image Tool option, selecting the Shape tab and finally clicking the star to be measured.  This causes a plot of ADU counts for the star at increasing pixel radii from the centre of the star.

Now compare the plot above to the plot of the light profile of the same star in the two star image X2253V2470004 that follows in Figure 24. 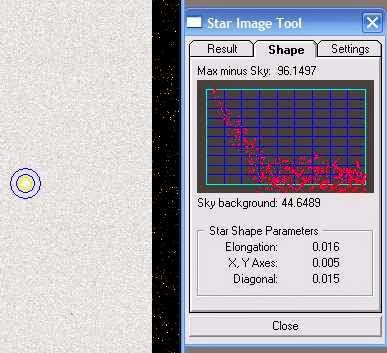 Figure 24: Light profile of C1 from an image showing only two stars.

Notice how the light profile of the same star obtained from the image with several stars is relatively tight and thin, whilst the other light profile from the image with only two stars has a curve that is thicker and more diffuse.  The latter curve is exactly the kind of curve one would expect to see if the starlight is being diffused by a cloud!  Light that would have been thinly concentrated at each particular radius is being scattered by cloud particles over several radii.  X2253V2470001 is another image with only two prominent stars and it too showed a “fuzzy” light profile similar to Figure 24.

It is a well established precedent that accurate differential photometry may be carried out through “haze or light clouds” (Berry and Burnell 293)  Given that fact, was the haze or cloud level thin enough in the remaining images to allow the possibility of valid results?  The accepted practice to check for this condition is to make sure that the target star and at least one other star has a signal-to-noise ratio of 100 or greater.  (Berry and Burnell 296)  This issue is very important because SNRs of 100 or higher are required to obtain accurate data on a light curve with an amplitude around 0.1 magnitudes or below, such as extrasolar planetary transits. (Warner 34)  After performing this check on all of the V filter images, the only images that did not meet this qualification were X2253V2470001, X2253V2470003, X2253V2470045 and X2253V2470049.  Therefore, if these are excluded from the set, what is left is a set of images suitable for differential photometry for this project.  However, even these images are such that the remaining 3 prominent stars have SNRs far below 100, meaning a restriction to having only one comparison star.

Because there were no comparison images of parts of the sky other than the field containing the target, it is obvious that the University of Tasmania observers intended differential photometry to be used in their analysis.  In my opinion this was a wise decision because differential photometry has three primary advantages: 1) accurate differential photometry may be done through thin clouds, 2) it is simpler to implement than other methods (Warner 32) and 3) atmospheric extinction issues affect it less than any of the other photometric methods.  In fact, as long as the target and comparison star have similar colors, atmospheric extinction effects are essentially totally eliminated!   This condition is true because all stars in the image are of necessity shot through the same filter, at the same time and are close enough to each other that they are thus subject to essentially the same airmass. (Berry and Burnell 279, Warner 32-33)  Unfortunately, it is not always possible for the target star and comparison star to be of similar colour, and this issue will be discussed later.

In the next instalment of this tutorial, the method of setting up the actual differential photometry using the Magnitude Measurement Tool will be described in detail.