NASA Eclipse Maps Are In Error as much as One-half Mile!

Simple steps to get more precise info about the upcoming solar eclipse. 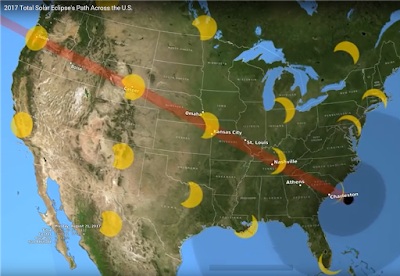 
As I detail below, the problems with the NASA eclipse map app go even further than the article in the Kansas City Star indicates.  See their article: “Those maps of eclipse path? ‘Wrong’, experts say by up to one-half mile at edge”  They are correct in saying the app might mislead you to think you are at the outer edge of the path of totality (where you would get  to see one, two or more seconds with no direct sunlight peeking around the Moon) when you actually are not!


First point.  The reported inaccuracy doesn’t just apply to the boundary edges of the path of totality, it also applies to the center of the path where the amount of totality time is supposed longest.  Again, you might think you are going to get maximum totality at the location you have chosen, when you are not.  Mind you, it will only be a few seconds off at most, but still off.  To die-hard eclipse chasers, every second is precious.


Second point.  As an astrophysicist, I would never rely on the NASA map for this very reason.  Instead, there is only one truly reliable source of eclipse data; that is, the U.S. Naval Observatory.  Eclipse prediction has always been USNO’s job almost as far back in time as the nation’s founding.  Even NASA gets their data from USNO when they want to figure spacecraft trajectories.


Following is a detailed description of what I do for maximum eclipse prediction accuracy that I use.  It is simple enough for anyone to do.  Run the Google Earth app.  Use that app to find the latitude, longitude and altitude of the location you are checking.  Next, enter this data into the USNO’s Eclipse App at: http://aa.usno.navy.mil/data/docs/SolarEclipses.php.  Note you may have to convert the altitude from feet to meters, but Google has a web app for that.


The above method is how I determined that the Anderson Jockey Lot would have the longest totality time of anyplace on the I-85 corridor.  Btw, the NASA app predicted a totality duration 3 seconds shorter than the USNO app in this particular case.