Measuring the Sun’s Diameter with a Cardboard Rug Tube


This project uses a long cardboard tube that comes with a linoleum rug with no lenses or mirrors, to measure the diameter of the Sun with fairly high accuracy! For maximum accuracy, it also requires the use of a digital camera, a computer and some free software. As I promised in my earlier article on how to make a camera obscura, this follow-on project uses the hole projection principle mentioned in that earlier article. Sorry for the delay in getting this project completed and up on this blog, but finishing the Completion of Candidature phase toward my PhD took precedence.


The General Principle of the Experiment
A hole at one end of the tube will be used to project an image of the Sun at the other end, just as the hole at one end of a camera obscura could project an image of an object on its opposite end. Such a device for measuring the properties of the Sun is called a heliometer, from the Greek word helios for the Sun, whilst meter means measure. Thus, a heliometer is an instrument for measuring the Sun. Please refer to my article A Camera Obscura from an Oatmeal Box for an explanation of the scientific principles behind the hole projection method upon which both projects are based.


Though the project is not highly complex or excessively time consuming, it is important to note that completion of the project requires skills, tools and material beyond those available to most children. I put close-up photos at the end of this article for those who want to see how I assembled the mount and other parts. But you should know that a jig saw and a drill are required for assembly of the mount. Thus, children should only participate in this project with careful adult supervision. Given these facts, I am writing this article at an adult reading level assuming that a grownup will supervise the construction of the instrument. 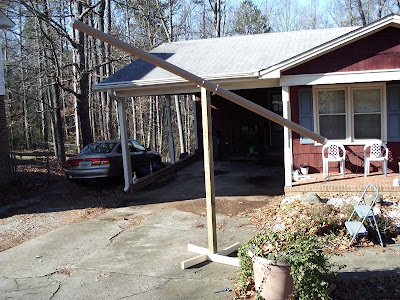 In Figure 1 you see the completed heliometer. To prevent this article from being excessively long, I will merely explain how the instrument works instead of talking about how to assemble it. The tube is essentially a long camera obscura with a small hole on one end (through which sunlight will pass) and a translucent viewing screen on the other end, as pictured in Figure 2. The illustration is, of course, not drawn to scale.

Figure 2: Image of the Sun projected on the rear of the heliometer. Note: a circular cross-section of the spherical Sun is depicted on the left.


I actually used the oatmeal box from the earlier camera obscura project. I cut off the round bottom of the box, enlarged the pinhole and affixed it to the front of the tube. We need a fairly large hole so that a bright image can be formed on the screen, in this case around 4 to 5 mm across. You want the hole in the front to be as perfectly round as you can get it. I found that using a pencil soldering iron to burn through the cardboard makes a very smooth round hole. Just don’t keep the iron in contact with the cardboard for too long as you don’t want it to catch fire! Again, I used the translucent lid of the oatmeal box as the screen onto which the image is projected.


The triangles formed by the light cone from the Sun to the hole and from the pinhole to the image screen are proportional. However, the light rays at the hole do not cross at a perfect geometric point because the hole has a diameter of around 4 mm. Thus, the resulting image will be bigger than if the hole was a point. Look at the illustration in Figure 3 of the Camera Obscura article to get an idea of what I mean. The light beams from the Sun cross each other both before and after the hole. Intuitively, one might think that the final projected image will be wider than an ideal image theoretically generated from a perfect point and that it would be wider by an amount equal to the hole’s diameter. Using the aforementioned illustration, I came up with a geometric proof (which I will not detail here for the sake of brevity) that showed the image should indeed be larger by that amount.


Making Photos to Obtain Data for the Calculation
The following Figure 3 shows an actual image of the Sun projected on the translucent plastic screen that was shot with a digital camera. If your camera has a “macro mode”, you can set it to that mode to take perfectly focused photos at a distance of half a meter (about 1.6 feet) or less from the plastic screen: the closer the better. Please note that, for reasons to be explained later, the camera should be set up to put a time stamp on each image before you shoot. 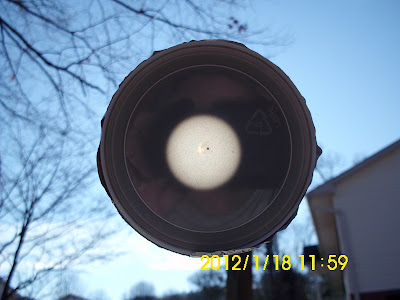 
Many of you who are amateur astronomers may be familiar with the fact that any image of the Sun will exhibit limb darkening, which is a gradual darkening of the Sun’s image towards the outer edge of the solar disk. An explanation of why limb darkening occurs would cause us to stray too far afield. Instead, we’ll just talk about compensating for it because the true edge of the Sun is so darkened that it is not plainly visible. At this time we apply one of the advantages of digitally recorded images; that is, we can increase the visibility of certain things by heightening contrast and/or brightness with a fine level of control. In the next illustration, I heighten the contrast to maximum then adjust the brightness to give a stark white solar image disk with fairly sharp edges. The disk should appear larger because even the areas of the disk with previously invisible sunlight become detectible to the eye. Please note that the washed out areas above and below the disk are a reflection from my hand that was holding the camera and smears into part of the bottom of the solar image. That doesn’t matter since most of the disk edge is fairly sharp. Notice that the solar disk image is indeed slightly larger than it was in the unmodified image. 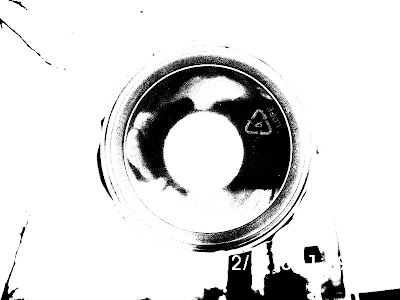 
Extracting Data from the Photos
Before we measure the size of the solar image, it is important to find the scale of the image; which is the number of pixels per millimeter. So all I needed to do was measure the diameter of the plastic lid in pixels, then divide that by the actual diameter of the lid in millimeters. Most photo computer applications will show you the pixel position of the mouse cursor. It was easy to get the diameter of the lid in pixels by moving the cursor to the outer left edge of the lid and reading the smallest horizontal pixel position, then reading the largest horizontal pixel position directly on the other side of the lid across its diameter. Of course the actual diameter in pixels came from subtracting the position of the rightmost value from the leftmost. In my case the diameter of the lid was 2160 pixels. Since I had earlier measured the lid with a ruler as being 105 mm in diameter, the scale was 2160 pixels / 105 mm equals 20.57 pixels per mm. 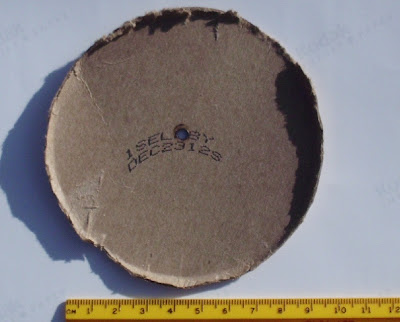 Figure 5: Measuring the hole at the front of the tube.


But we want the most precise distance to the Sun that we can get, in order to maximize the accuracy of our answer. I did this by using the free planetarium software called Stellarium. In order for the application to give me accurate answers, I had to set it up for my latitude and longitude and my correct time zone. Once I had done that, I set Stellarium’s time and date to the value indicated by the image’s time stamp. At that point Stellarium showed the Sun as it appeared in the sky at the time the photo was shot. When I clicked the sun on my computer screen, it gave me the distance to the Sun as 0.98383515 AU. Expressed in kilometers, this distance would be 0.98383515 times 149,597,871 kilometers per AU. The product of those numbers is approximately 147,180,000 km. I then divided that number by 106.943 to get the Sun’s diameter as about 1,376,240 km.


The formally established diameter of the Sun to 6 decimal places is 1,391,020 km. The answer I got was too low only by 1.06% of the formally established value. Not bad for a cardboard tube! It may be possible to get it to even better accuracy if a PVC tube is used instead of a cardboard tube. The occasional light wind kept gradually bending my cardboard tube into a slight bow shape from which it would not straighten back out; therefore, I had to measure the direct length from the front to the back to compensate for the slight bow that developed. That shouldn’t happen with a PVC pipe.


What I would like to do (if I can get the time) is redo the experiment with a PVC pipe, take more than one measurement and average my results to maximize accuracy. Even though I took many exposures with this experiment, I only got one image well centered on the screen that was good enough for measurement. This was because of slightly windy conditions causing the tube to move on its mount. Furthermore, I had to keep re-measuring the length from front-to-back in order to compensate for the slight bowing of the tube by the wind. In other words, the rug store gave the cardboard tube to me for free, but I paid a price in other ways.


I hope some of you will try this experiment yourself. For me it was a fun break from work involving more advanced math and higher level physics. As for my next project, please be patient because it may be a few months. My PhD related research must take precedence, but my next project posted on this blog will be something amazing if it works! 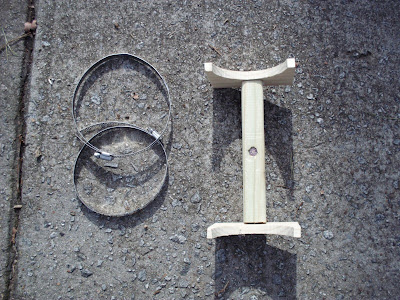 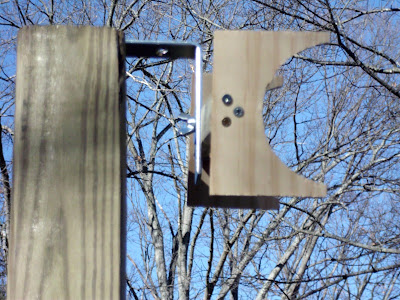 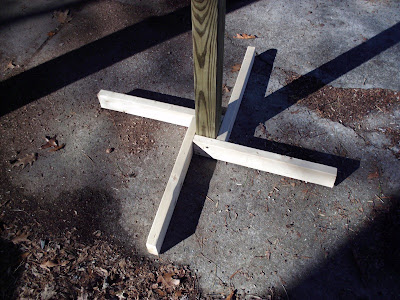