Article about how SLS benefits Russia

For those interested, my latest article for The Space Review is here: http://thespacereview.com/article/2532/1
Posted by Rick Boozer at 1:23 PM No comments:

Following is a press release written by SDSC chairman Howard Bloom concerning Senator Richard Shelby's proposal regarding Commercial Crew and Commercial Cargo.  This release is a very good synopsis of the present situation.  The only note I would add to it is that the 50% to 200% cost increase I mentioned did not originate with me but came from Henry Vanderbilt of the Space Access Society:

America has a space gap and Senator Richard Shelby (R, Ala.) wants to make it worse.  Shelby has inserted what the Space Access Society calls  “a poison pill” into a basic budget bill, the Senate Commerce, Justice, Science, and Related Agencies Fiscal Year 2015 Appropriations Bill. As Shelby puts it, he inserted language into the appropriations bill “that provides greater accountability and budgetary transparency in the commercial crew program and future commercial cargo missions.” What are the “Commercial Crew and Commercial Cargo” program? The Commercial Cargo program has purchased two flights of Orbital Sciences’ Cygnus capsule, which delivers cargo to the International Space Station, then burns up in the atmosphere, and four flights of Elon Musk’s Dragon Capsule, the only American vehicle capable of taking fresh supplies to the International Space Station and bring finished experiments and other used equipment back to earth. Even more important is the Commercial Crew program.  Since the Space Shuttle was retired in 2011, America has been forced to send its astronauts to the International Space Station on Russian Soyuz rockets and to pay Vladimir Putin’s space industry an estimated total of four billion dollars for the privilege.  On May 29th in Hawthorne, CA, SpaceX head Elon Musk unveiled a vehicle—his Dragon Capsule Version Two—that can end our dependence on the Russians.  In fact, the Dragon V2 can get us off the Russian hook as early as 2016.  But Shelby is trying to slow SpaceX down by a year or two, and make the ticket for a Dragon Capsule ride to space as expensive as possible.
Shelby’s trick?  He wants to force SpaceX and other non-military-industrial-complex providers to use the same accounting system used by weapons contractors like Boeing and Lockheed Martin. That accounting system—the infamous “cost-plus” system--demands an entire specialized accounting department working full-time.  It’s one of the reasons that plastic toilet seats for military airplanes cost $1,300 each.  What’s Shelby’s motive? Elon Musk’s Dragon capsule says the Space Access Society, “threatens to undermine the justification for Senator Shelby's missionless and massively wasteful hometown government mega-rocket project, SLS.”  The SLS, the Space Launch System, is a giant rocket based on 1970s Space Shuttle technology that some say will be too expensive to fly.  But the SLS supports 6,000 Alabama jobs and brings $2.5 billion to Alabama.

Space Development Steering Committee member R.D. Boozer, author of The Plundering of NASA, estimates that Shelby’s maneuver could increase costs of SpaceX and Orbital’s capsule flights by 50% to 200%.  And, points out Boozer, the last time an attempt was made to impose the burden of cost-plus accounting on SpaceX, Elon Musk said he just might stop bidding for Commercial Cargo and Commercial Crew contracts.   This could produce a problem. The Russians are charging us $71 million a seat to get Americans into space on the Soyuz.  SpaceX intends to charge $20 million.  That’s a saving of a whopping 71%.
But a ticket on the SLS, the rocket being developed in Shelby’s home state, will cost roughly $333 million per seat—nearly seventeen times as much as SpaceX’s price.  In other words, you could fly 15 crews—102 astronauts-- to the International Space Station on SpaceX Dragon V2s for the price of flying just one crew of six astronauts on Shelby’s Space Launch System.  What’s more, you’d be able to fly a crew of astronauts on a Dragon V2 capsule in less than two years.  But you won’t be able to get an American, astronaut or not, into space on the Alabama rocket, the Space Launch System, for another eight years.  Or more.  The Dragon V2 is a bird in the hand.  The SLS is a bird in the bush.

Posted by Rick Boozer at 7:37 AM No comments:


The Plundering of NASA offers an insightful analysis of the agency’s struggle with external forces tending to distort a clear, long-term US vision for space exploration. In crisp and concise prose, R.D. Boozer calls into question NASA’s current “flight plan” for reaching its stated destination, and makes the case for recasting that plan in the crucible of the game-changing technologies needed for a truly sustainable and robust human exploration of space. An enlightening read for those who are not in the field and food for thought for those who are. 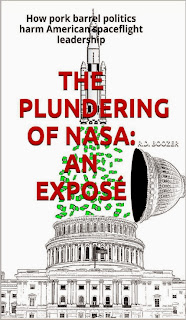