Everyone talks about how visually stunning it is when the darkened Moon fully covers the face of the Sun in a total solar eclipse.  And indeed, it is!  But there are other unusual, truly strange happenings that occur when the Moon passes in front of the Sun.   If you aren’t prepared to look for them, some of these weird phenomena are so fleeting that you can miss them.  Following are descriptions of a number of those novel occurrences to be looked for on August 21st.
Long before totality (when the Moon is only covering part of the Sun’s face), go to a nearby tree and look in the shade of the tree’s shadow.  You will see hundreds of crescent images of the partially covered Sun all over the ground!    In fact, this is a safe way to view all the partial phases of the eclipse without harming your eyes.  Where do all these many images come from?  The gaps between the tree’s leaves act like a pinhole camera by projecting the Sun’s image on the ground.  Here is a photo that was shot of such a tree shadow during a previous solar eclipse: 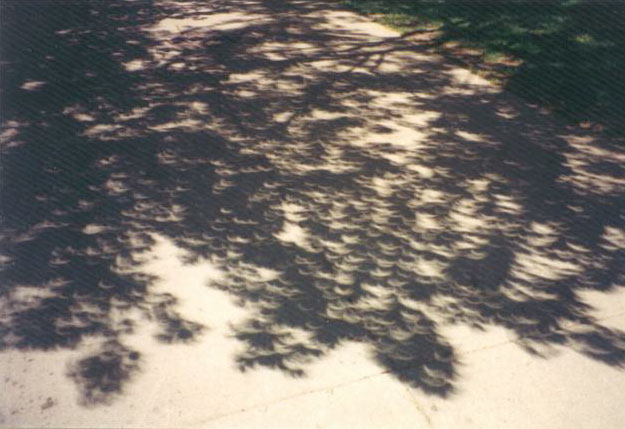 (Above image credit and copyright Elisa Israel)
Anywhere from 60 to 90 seconds before totality or just after totality ends, closely look at any flat light-colored or white surfaces around you.  You may see a very strange sight.  At such times, dark lines called shadow bands may be seen racing back and forth across the surfaces.  These shadowy lines are caused by sunlight peeking around mountains and through valleys around the outer rim of the Moon, while turbulence in the air makes them appear to shift position.  To see a video of eclipse shadow bands, go here: https://www.youtube.com/watch?v=f_XMnU7Ad40
In the minutes before totality, all of your surroundings will appear dimly lit in a very strange and different way from what you experience at sunrise or sunset.  Everything will seem somewhat similar to what you see when you wear very dark sunglasses, but with a kind of surreal sheen that can’t be described adequately.
As soon as the Moon entirely covers the Sun and causes the sky to completely blacken, the air will instantly chill -- perhaps by as much as 20 degrees Fahrenheit.  Animals will become confused.  Bats may fly around thinking it is night.  Birds may go to roost.  Crickets or cicadas may begin to chirp.
If the land is flat for miles around your location or you are on a mountain top, you will be able to see the darkest part of the Moon’s shadow (called the umbra) racing across the ground towards you just before totality and away from you afterwards.  Here is video of the approaching and leaving umbra as seen from an airplane: https://www.youtube.com/watch?v=InlUONyIpdM
An instant before the Sun’s disk is completely covered by the Moon, you should experience the visually stunning diamond ring effect.  The slight bit of Sun remaining will give the impression of a brilliant diamond with the ring being a faint glow around the darkened Moon.  Some images of the diamond ring effect can be seen at this link: https://sunstopper.wordpress.com/tag/diamond-ring-effect/
IMPORTANT NOTE: The brief few minutes of totality is the only time it is safe to look directly at the Sun with no eye protection.  If you are wearing special eclipse glasses, take them off when the Moon completely covers the Sun.  But be sure to put them back on if you continue looking at the sun as soon as totality is finished.
It will become dark as night during totality.  The stars will pop out and you will see two very bright points of light near the Sun. They are really the planets Venus and Mercury.  Most people never get to see Mercury because it is usually so close to the Sun that it is blotted out by the Sun’s glare.
Mars and Jupiter will make an appearance.  Those two planets will seem to be near the Sun, when in reality they will be much farther away on the far opposite sides of their orbits.  In total, 4 of the 5 planets that don’t require a telescope can be seen during the eclipse.
Sirius, the Dog Star, will show itself as the very bright star to the southwest of the Sun.  In fact Sirius is the second brightest star in our sky after the Sun.
If we are lucky, there will be eruptions from the Sun that cannot be seen at any other time.  These eruptions are called prominences and will glow a bright beautiful ruby red color.  Go here to see a photo of red prominence eruptions during an eclipse: http://county10.com/will-wildlife-be-fooled-into-bedding-down-for-the-night-during-the-eclipse/
The bluish white glowing corona (outer atmosphere of the Sun) is made of charged hydrogen atoms; AKA plasma.  During totality, the corona allows us to see the beautiful structure of the Sun’s powerful magnetic field as the plasma is pulled by magnetism into graceful curving field lines.  Check out this gorgeous corona photo:  http://www.zam.fme.vutbr.cz/~druck/eclipse/Ecl2013g/TSE_2013wa_ed/0-info.htm.  As pretty as this image is, no photo can capture the almost ethereal fluorescent hue that you will see when looking directly at the corona.  Also, notice that you can see red prominences in this image near the bottom of the Sun.
I hope this description of strange eclipse phenomena has piqued your interest and raised your excitement level about the upcoming total solar eclipse.  Remember that the Anderson Jockey Lot will have the longest running totality period of any location along the I-85 corridor and U.S. Highway 29.  See you there!
For more information contact me (Rick Boozer) by email at topastro@singularsci.com. 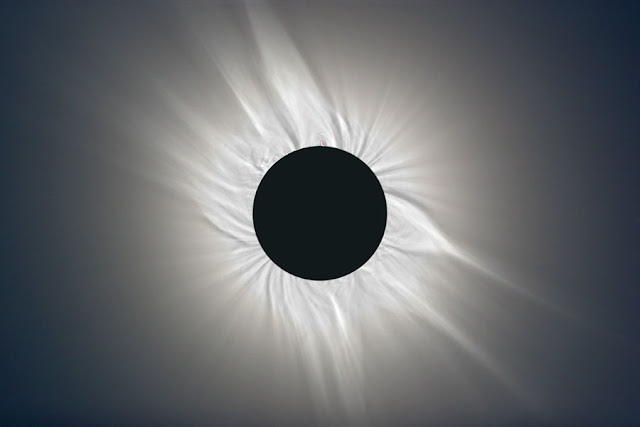 For the first time in 47 years, South Carolina will experience a once-in-lifetime total solar eclipse!  On August 21, 2017, Anderson Jockey Lot will host a viewing of the event as a free public service.  Astrophysicist and veteran total solar eclipse observer, Rick Boozer will provide expert running commentary as the eclipse progresses -- beginning with the more than hour long partial phases and then ending with the short (but spectacular) period of totality.
Assuming clear skies, the Anderson Jockey Lot on U.S. Highway 29 will be the best viewing location of the totality climax along the I-85 corridor with longest totality time in this area of 2 minutes and 40 seconds according to the U.S. Naval Observatory's Solar Eclipse Computer.  Totality for the City of Greenville will be 2 minutes and 10 seconds – fully 30 seconds less.  Spartanburg, at most, will only have several seconds.

Why will the Jockey Lot experience a longer totality than any place else along U.S. Hwy 29?  It is because the very center of the Moon's shadow will pass over that location.  Thus, anything farther north or south of the Jockey Lot along U.S. 29 will experience a shorter totality time.  For instance, even though Green Pond is only a few miles south of U.S. 29 away from the Jockey Lot, totality there will be 8 seconds shorter.
When observing an eclipse’s partial phases, it is important to understand that eye damage can occur if viewed with the unprotected eye.  Normal sunglasses do not filter many harmful solar rays that can injure your eyes during the partial phases.  For the public’s safety, special eclipse sunglasses will be available at the event (while supplies last).  The special glasses will not be needed during totality.
Everyone is welcome to view the eclipse at the Anderson Jockey Lot.  We will attempt to shoot video of the eclipse and, if successful, the footage will be accessible online.
Partial eclipse phases begin at 1:09 PM EDT.  Totality will start at 52 seconds after 2:37 PM EDT and will end at 32 seconds after 2:40 PM.  Late partial phases end at 4:09 PM EDT.
Of course, if the sky is cloudy, the total eclipse will not be seen.  Let’s all cross our fingers for clear skies!
Our thanks to Anderson Jockey Lot owner, Mac McClellion for allowing this public event on his premises.  Special accommodations for campers will be available as described here: https://www.facebook.com/AndersonJockeyLot/posts/1600346250007626
For information contact Rick Boozer by email at topastro@singularsci.com.
The next total solar eclipse in South Carolina won’t happen for another 60 years, so don’t miss the eclipse this August if you can help it!
--- Photo of total solar eclipse by Koen van Gorp and used here with his permission ---